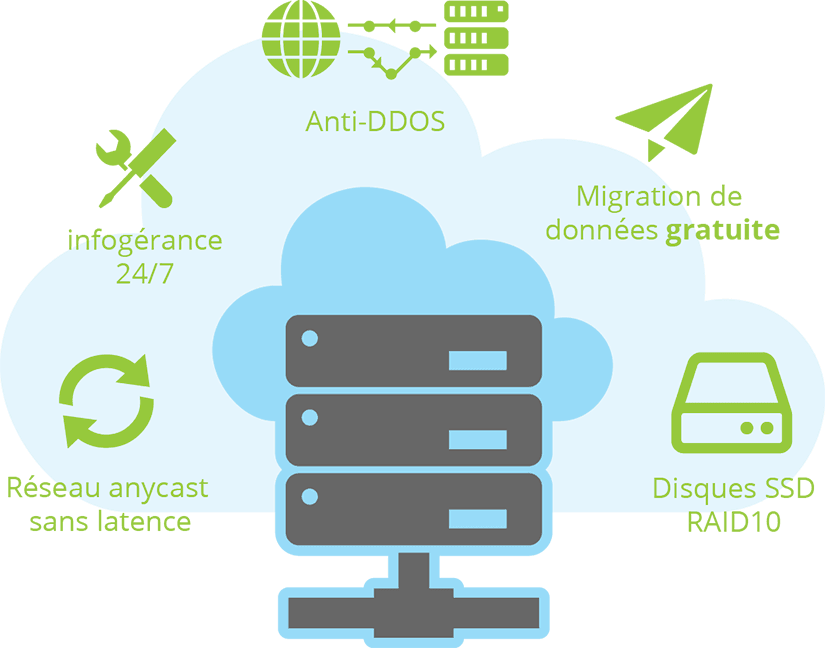 Looking at the web hosting market, you’ve probably noticed the ridiculous price of dedicated servers at some suppliers.

The price of dedicated servers is equivalent or even lower at times than our virtual servers (VPS).

So why opt for a virtual server PlanetHoster rather than a low cost dedicated server !?

Imagine, Marco, manager of several websites. Marco is looking for a dedicated hosting following a disastrous experience in shared hosting. He wants to have its own server to avoid being disturbed by other clients, but also to have better control over their hosting environment (activate certain functions PHP etc).

Marco knows how to tweak here and there. He does not have too much server management experience but he knows the base.

So he did his research on the web to find the web host that suits him. He comes across an offer that seems perfect it. A dedicated server Quad Core, 2x1TB etc. All for only 60 euros! He signed immediately.

All is well for several days, despite the fact that there are some slowdowns here and there, which, Marco can not find the origin.

Overnight, he is cautioned by his dedicated server provider stating that his server sends spam! Marco tries to find the problem without success, unfortunately. He is powerless before the problem and tries to resort to assistance from his host. His host told him clearly that he is not responsible for the management of his dedicated server. Marco must then turn to outsourcing! He contacted someone from the outside so that they fix the problem for him. The technician in question is charging him nearly 300 € in honorary fees to correct the SPAM problem.

A few weeks later, Marco’s dedicated server crashes. Nothing works, he can not even access his dedicated server! His host informed him of corruption on his hard drives, Marco lost all data! Marco, who thought initially it was a good deal on a dedicated server at 60 euros, is left with angry customers that have lost their web site, e-mail and more!

Imagine again Marco, but this time by choosing a premium virtual server from PlanetHoster. Marco is still responsible for many websites and still looking for a dedicated hosting. He did his research on the web and found PlanetHoster VPS’.

Planethoster technicians contact him and provide his credentials to connect, personalized all the way. They prepare his server, they secure and optimize it. They customize his server to the exact requests of Marco (install the required PHP version the version of MySQL etc).

Marco’s websites are very quick thanks to PlanetHoster’s infrastructure in RAID10 100% SSD. Marco suffers no slowdown and the whole is very stable. Marco can easily manage his websites through cPanel. In addition, Marco’s clients have access to their own cPanel.

A few days later, the PlanetHoster monitoring system detects that Marco VPS’ sends SPAM. Within minutes, a technician connects to the VPS for Marco arranged it for free. Marco did not have to do anything. No hassle, no problem.

A few weeks later, one of Marco’s clients made a mistake. He deleted important files. Marco contacts PlanetHoster. Quickly, a technician restores him the missing files since Marco’s VPS is backed up daily. It can go up to 20 days thanks to R1Soft backups.

In short, Marco is very satisfied. Everything is very fast thanks to PlanetHoster’s infrastructure in RAID10 100% SSD. Also, thanks to cPanel included free, he can easily manage his websites. With 24/7 Managed Hosting offered free of charge, he can sleep peacefully at night knowing that his server is monitored by the team at PlanetHoster.

If you were in the place of Marco, what situation would you have preferred?