Evolution of the Modern Office – How Did We Get Here?

The Idea in Brief

The modern office has evolved over centuries in response to economic, political, and social influences. The first modern office buildings were designed as white-collar factories. In the post-World War II decades corporations flourished becoming more and more prosperous. This era saw a considerable number of corporate office towers created to establish and reinforce the brand and culture of an organization. As corporations began to expand and increase in number, interiors for businesses began to evolve to support new work styles.

The current imperative is to encourage interaction at all levels. Workers are surrounded by, and have access to, information at all times. Workplace design aligns with corporate goals by designing for maximum interaction and communication. Physical barriers are removed – walls are made of transparent glass, mobile screens are used to define space, furniture can be re-configured by the user and information is available anywhere/anytime through wireless networks.

Evolution of the Office 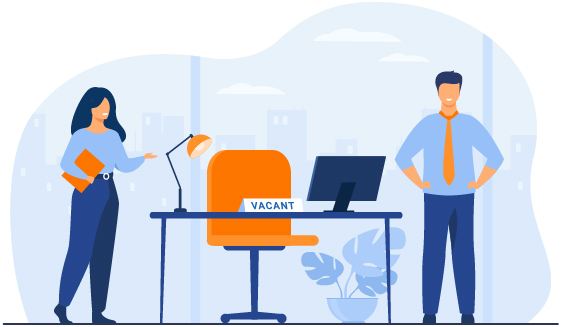 Modern offices find their origins in the need to keep records and maintain information. The first office buildings were places for governments to keep track of census data, tax information, and knowledge needed for the maintenance and expansion of trade. Well known centers of records and record keeping include the Library at Alexandria, Egypt dating from the third century BCE; the Uffizi in Florence, Italy which was designed as a government office building in 1559; and the Bank of England dating to 1788.

While we don’t tend to think of these buildings as antecedents to the modern office, they illustrate several key concepts at work in the office today. They all provide a home for vast amounts of information; they bring together people with a common purpose; and they are co-located with other organizations that have political, economic, or social affinities. In those terms it is not hard to see the link between the Library at Alexandria and the offices of Citibank or any other major corporation.

Today’s modern office has evolved in response to the same political, economic, and social drivers as in centuries past. The major difference starting in the late 19th century and continuing today is the advancement of communication technology at an unprecedented rate. Early mass communication technologies like the telegraph and telephone allowed administrative workers to be located remotely from factories or farms.  Better transportation networks – themselves a critical part of the communication network – allowed trade to flourish. More trains, better roads, access to cars, and affordable air travel have led to today’s truly global economy.

Cities such as New York and Chicago became early magnets for organizations that needed to find diverse markets for their goods and services. As the population of these cities grew, real estate became more valuable and the pressure to maximize return on investment provided the incentive to create skyscrapers.

The first office buildings that we would recognize as “modern” were designed as white-collar factories. Work was divided into its component parts and processed in large open office areas by clerical staff. Frank Lloyd Wright provides two examples of this approach. His 1904 administration building for the Larkin Company in Buffalo, NY provided a large central sky-lit common area surrounded by open galleries populated by managers and administrative staff. This arrangement allowed the staff to process more than 5,000 orders per day for their soap products, an astonishing amount at the time. He employed a similar arrangement for the administrative portion of the Johnson Wax Building in Racine, WI designed and built from 1936-1944, forty years after the Larkin Building.

The post-World War II decades ushered in a time in which corporations flourished, becoming more and more prosperous. This era saw a considerable number of corporate office towers created to establish and reinforce the brand and culture of the organization. As companies expanded and increased in number, interiors for the organizations began to evolve to support new work styles. Much of what we associate with offices from the period beginning in the mid-1950s and still seen in some buildings today is driven by a need to express status.

The corporate headquarters itself is often an integral part of the brand (consider the former Pan Am Building, now the Met Life Building in New York). These offices typically included closed offices around the perimeter with open work areas either designed as a bull pen or a series of open office cubicles. The higher your status in the organization the larger the private office and the more windows you were allotted. The interesting corollary to this development is that the higher in the organization you rose, the more likely that you traveled extensively and the less likely you would be in your office. A well-known statistic today is that in the typical administrative office 40% or more of assigned spaces are vacant at any time.

In the mid-1980’s and early 1990’s technology such as the internet and wireless phones were beginning to make it possible to stay connected to the office without a need to have an assistant on the ground at headquarters to relay information or field calls and meetings. About 1990 the advertising firm Chiat Day (now TBWA / Chiat Day) took a radical step and designed a headquarters without any assigned spaces. While a bold experiment, it did not succeed, and workplace strategists have learned at least two important lessons from the project.

First and foremost, at the time, technology was not developed enough to enable seamless support of a mobile work force. Today we have Wi-Fi, VoIP, air cards, the cloud, Zoom, WebEx, and other technologies that truly allow us to access information and work anywhere/anytime.

Second, the workforce of 1990 was controlled and populated mostly by baby boomers who saw space as a status symbol and entitlement. The new entries in today’s workforce are Millenials or Gen Y who have never known a non-digital world. They don’t think of work as place to go. They think of work as an activity to engage in – whenever and wherever it is convenient.

What Is the Purpose of Today’s Office? 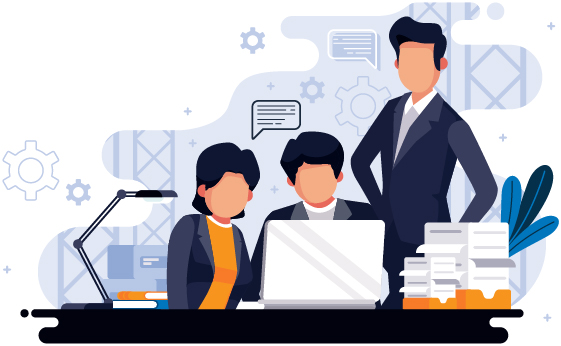 At the core people are social animals. We need to interact with others and have a shared goal. We want to live and work in community. Corporations provide a common goal for workers to support and advance. The corporate office, then, provides the place to come together. It embodies and reinforces the corporate brand, message, and culture. Business strategy is developed and communicated to the global staff from the headquarters ensuring that all stakeholders are clear about business goals and are able to advance the corporate strategy.

As seen in the 1904 Larkin Building referenced above the idea of an open office is not new. It was recognized at the time that easy access to others in the organization increased productivity. Over the years, however, office work has changed. The Larkin building was designed for “task” workers who typically do the same task day in and day out. Other types of work began to demand different types of space.

Knowledge workers create, analyze, and disseminate information to create value. Tasks are never the same from day to day and a significant amount of time is typically spent interacting with other people either face-to-face, on the phone or by the written word. The rise of knowledge work necessitated different approaches to planning than those used for task workers.

Knowledge workers rely on access to information, which until very recently meant access to paper files, books, and other printed documents. Information technology has revolutionized what is needed in the office. While we have not become a totally paperless society, Wi-Fi coupled with technologies like the iPad, iPhone, laptop computers, and the cloud allow us to access information from any location in the world.

The two largest cohorts in the workforce today are baby boomers and Millenials or Gen Y. Legacy office spaces are often the product of boomer values and work styles – large private offices, space used as a reward for years of service, etc. Gen Y workers are changing the paradigm. The next wave – Gen Z – will have even more of an impact on office design.

The entry into the workforce of this latest generation of workers will have as great an impact on workplace planning as has the revolution in information technology. This group is the first generation of digital natives who have grown up untethered by non-mobile technologies. Earlier generations – traditionalists, boomers, and Gen X – all began their working lives with technology that required the user to go to the technology. Now the technology travels with the user. Several studies support the observation that Millennials and Gen Y workers have a natural affinity with each other. Gen Y provides support and guidance with technology while the boomers provide wisdom and mentorship.

Current business drivers include the need to innovate, the need to attract the best talent, the need to capture market share, and the need to be transparent with all stakeholders comprising investors, workers, customers, and government agencies. Today’s workplaces are responding with new planning strategies that address these drivers.

Corporations now strive to inspire innovation and interaction as a means to increase profits and market share. To support the culture of innovation many major corporations are rethinking the workplace and providing activity-based settings for large components of their organizations.  These workplaces are designed to encourage a “work anywhere/anytime” culture. Typically these workplaces include a variety of work settings to support a number of work styles. These may include quiet rooms for individual heads-down work, open collaborative areas that encourage casual interaction, war rooms that are used for special projects, individual workstations, private offices, commons areas that center around food and formal conference / presentation rooms.

The trend in Europe has been toward completely open workplace planning with no assigned private offices and all personnel assigned an individual space at a work bench. This solution includes a number of support spaces for individual work, collaborative work, casual encounters, and formal presentations or meetings. The office space is conceptualized more like a residence with spaces that are designed for specific functions that staff use as needed, rather than expecting a single space – the enclosed office or cubicle – to support every work activity. This approach is enabled by, and encourages, mobility. This approach is gaining proponents in the United States.  A new facility for Glaxo Smith Kline at Philadelphia’s Naval Business Center that opened in 2012 incorporates a benching strategy that the company has employed in other global facilities.

The concept of space as an entitlement is rapidly disappearing. The current imperative is to encourage interaction at all levels. Workers are surrounded by and have access to information at all times. Workplace design aligns with corporate goals by designing for maximum interaction and communications. Physical barriers are removed; walls are made of transparent glass; mobile screens are used to define space, furniture can be re-configured by the user and information is available through wireless networks. When privacy is needed workers either retreat to a small quiet room or work off-site.

The office as a place for communication and rallying point for a common goal has evolved over centuries. It will continue to evolve as needs, wants, aspirations, and economic conditions change. Taking the long view, the trend has been from fixed to mobile, closed to open, and individual to collaborative. Workplace planning will continue to respond by providing flexible and diverse facilities that encourage transparency and interaction. The next iteration will be exciting to see.